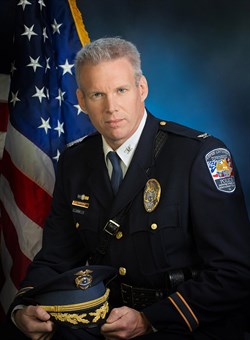 Chief Duffy began his police career in 1987. He worked as a police officer on a special patrol squad in the city of Wildwood, NJ. In 1988, Duffy was hired as an officer in the Chalfont Borough Police Department, Bucks County, PA. In 1989, Chief Duffy was hired as a police officer in the Doylestown Township Police Department, Bucks County, PA. Duffy was promoted as the first corporal in the department and was later promoted to Sergeant.

Chief Duffy has earned Associates and Bachelors degrees in Criminal Justice. He earned his Masters Degree in Public Safety Administration from Saint Joseph's University in Philadelphia. He graduated from the 219th Session of the FBI National Academy. Chief Duffy also holds a first degree black belt in karate.

In addition to his police service, Chief Duffy has held many adjunct positions over the years in teaching and consulting.

Although his duties as chief limit his adjunct endeavors, he remains active in several professional law enforcement associations.

When he is not on duty, Chief Duffy enjoys working out and spending time with his family.